I will be honest a bunch of us dedicated budget/council watchers viewed some or all of the meeting. Afterwards, we had a few debates as to what happened. This is how convoluted this process is. Even people well versed in the dysfunction of the El Cerrito government can’t always keep up with the what is going on. A cynical person might believe that is the intent of having these discussions between 10-11pm at night.

I will start with what I know happened.

2. Pension Fund-Councilperson Motoyama wants to allot money for a Section 115 reserve fund to help address our YUGE unfunded pension liability. She wanted to use the library money to partially fund it. It ended as a motion to begin the process for the Request for Funding to get it set up. There will be further discussion on how to fund it and the costs to establish the fund. This vote was 5-0. While I cannot explain Section 115 well it is a positive outcome. We need to start addressing our pension liabilities and this is a small but good first step. Now we need to get and keep it funded.

What was not clear.

The Financial Advisory Board sent in a recommendation.

Here is the letter in its entirety

“To the members of the El Cerrito City Council: The FAB continued its review of the 2021-2022 proposed Budget Book at its June 8 meeting, and found that the budget presented to Council at the June 1 City Council meeting will not achieve the objective to put the City on a longer term path of sustainable financial health. As a result, the FAB makes the following recommendation: Prior to the June 30 deadline for adopting a 2021-2022 budget the Council should direct the Administration to prepare and present to Council at an additional budget meeting a proposed budget that includes the following:

A $1 million General Fund surplus that does not rely on the receipt of the ARPA funds;

A menu of options that could generate the $1 million surplus with explanations of impacts on residents;

For programs in the proposed Budget Book that contains material service reductions, an explanation of the impacts on residents.

Those of us that watched that FAB meeting thought it was clear that the recommendation was to have a 1 million surplus for 21/22. Not a surplus that included a carry-over from 20/21. 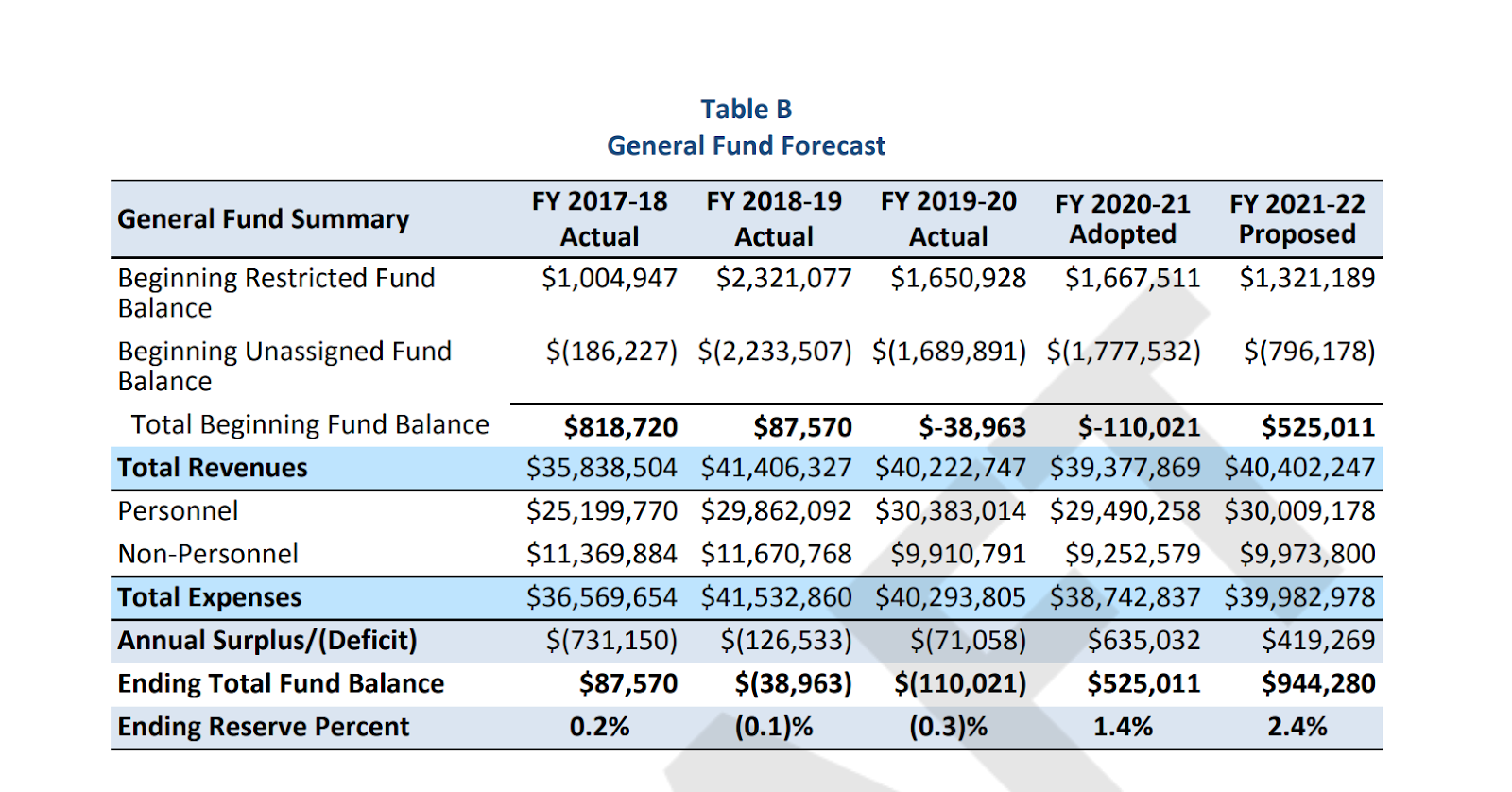 At the beginning of the council meeting Councilperson Rudnick suggested we only need to cut around $55,000 to meet the FAB recommendation. (This was before library hours being restored. ) We believe she took that information from the screenshot above. The General Fund Forecast shown above indicates a projected surplus at the end of 20/21 of $525,011 and then projects a surplus of $419,269 for 21/22 which means we would have a surplus of $944,280 at the end of 21/22. With an additional $55,000 we would have a million-dollar reserve as Councilperson Rudnick pointed out.

Given the way the FAB statement is worded, I can see where there might be confusion. I hope FAB clarifies their recommendation because obviously, people heard it to mean different things. Councilperson Rudnick did ask for clarification at the meeting and the Finance Director agreed with her. He attends the FAB meetings and I am confused as to why he did not clarify this point. At the end of the day the Council gets to decide whether or not to follow the FAB recommendation. If they choose not to follow the recommendation I believe they need to explain to the public why they made that choice.

10% of a 40 million budget is 4 million. In addition, we have a policy of having a 6 million Emergency Reserve. Our policies state we should have a total of 10 million in reserve. If we are putting away only $500k a year then it will take us 20 years to get a reserve that follows policy.

What is not clear is if the City Manager will ever provide a menu of cuts as repeatedly requested by the Council, the public, and now the Financial Advisory Board. This was brought up again by several Councilmembers including that the menu have the impacts as suggested by FAB. The City Manager continues to kick the can and put off making cuts. How will the city ever be financially sound if we do not make cuts? Our pension costs are going to go through the roof in the next few years. Even with cuts we are right on the edge.

The City Manager seems to intend to use the Federal Funds to pull things together for the next few years rather than addressing the larger structural issues. The Council keeps not holding her accountable for this. I get that because of delays in when they began to plan for the budget it is hard to make that level in cuts in 2 weeks. But the City Manager has been asked for this before. Those federal dollars were meant to help mitigate covid impacts on communities not bail out poorly run communities. In other communities, they are using that money to help renters or business owners. In our community, it appears that we will cut services to seniors permanently and not help anyone but highly compensated management staff. With the cuts made to the senior programs the seniors no longer have a place to hang out and socialize. Nor do they have a computer lab. Seniors have been severely impacted by COVID. To cut these services now seems cruel. At a minimum, if we had the menu of cuts option the community could have decided to pick which things got cut. Maybe the community would say cut senior services and save other things. But they should have been asked.

What to expect and what to ask for at the next meeting.